Behind, beneath, beyond the "One World" globalism

UN/UNESCO: 'Educated people are less sustainable than poor people' - page 12 on un.org -- Rationalizing your stupefication or elimination: Stupid or dead. Which one are you, in their utopia?

Examination of United Nations (UN) writings exposes Luciferian core; consequently, its ruthlessly-sought "globalism" serves whose interests? "It is difficult to get a man to understand something when his salary depends upon his not understanding it." - Upton Sinclair.

Is there some ethereal "evil" hatefully acting out through soulless servants? Or maybe it is humanity's increasingly apparent, insurmountable bondage to Earth, reflexively overdemanding a minimization of humankind to "ensure preservation" mainly for a select few "worthy" genetic downlines. Ultimately, what's the difference?

As ever, it comes down to the "Haves" versus the "Haves-Not". Meanwhile, every living human could fit inside the relatively tiny state of Texas (however uncomfortably) in his and her own townhouse. It has only the been the preposterously pollutive greed of a relatively few psychopaths who cavalierly consume, destroy, deny progress, and use governments, corporations, occulted armed forces [1] [2] [3] [4] [5], and other unaccountable and untouchable institutions to hold humanity hostage for profitable, covert slow-killing or manipulation into ritualized mass-murder (war). If some culling shall be, let it begin with the largest, worst and most brazen wrong-doers leading the way.

Will you lay down and let them take your here, now, and ever-after? They're counting on it. They're doing everything possible to ensure it. And, in some way or another, you may be working for its anti-human goals on a daily basis. Ignore the warnings and ever-mounting evidence at great peril.

American History from another angle

The Vatican's Role In The New World Order, Bill Hughes

AGENDA 21 is the UN's plan (already well underway) to remove private land ownership, private property, and all private means of production. AGENDA 21 puts "community rights" ahead of all individuals' rights. Rosa Koire on Corbett Report -- AGENDA 21 is the enablement of total takeover of all resources by those who want to (and presently do) control the earth and life on it. Because most people pay no attention to their local governments, the UN is implementing their plan there, out in the open, but with almost no public awareness. This interview identifies the problem and describes how to derail it.

"Look to your roots. Don't give up what others were prepared to die for." - Walter Veith

Beyond "One World" globalism

Does a global agenda truly serve your best interests?

In fact, every living human on Earth could fit inside the state of Texas with over 1,000 square feet per person. It would be nowhere near optimal, pleasant, or lastingly feasible, but the fact highlights "overpopulation" as myth invented to support an insidiously anti-human agenda of mass disenfranchisement and depopulation. Texas is a tiny thumb-nail on the massive Earth.

The deeper problem causing pollution and fruitless resource consumption is unbridled, unaccountable greed, compounded by overcrowding. Persons do not destroy their own wells, poison their own crops, or lessen their own lot; huge, untouchable corporations and multi-nationals do that, because scarcity, sickness and depletion monetarily rewards their greed-driven, psychopathy called corporatism. Unnaturally cramming everyone together for physical and mental control guarantees future mass suffering.

Maybe you don't believe or 'don't really care', but The Inquisition, The Crusades, The Reformation, witch-hunts, the Dark Ages, and all the many other religio-military ritualized mass-murder initiatives prove it matters very little what you may care or believe. In battle, willful ignorance and denial is deadly, "for we wrestle not against flesh and blood, but against principalities, against powers, against the rulers of the darkness of this world, against spiritual wickedness in high places." (Ephesians 6:12) Perhaps you might offer better explanation? 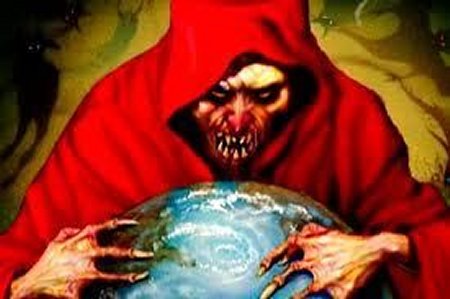