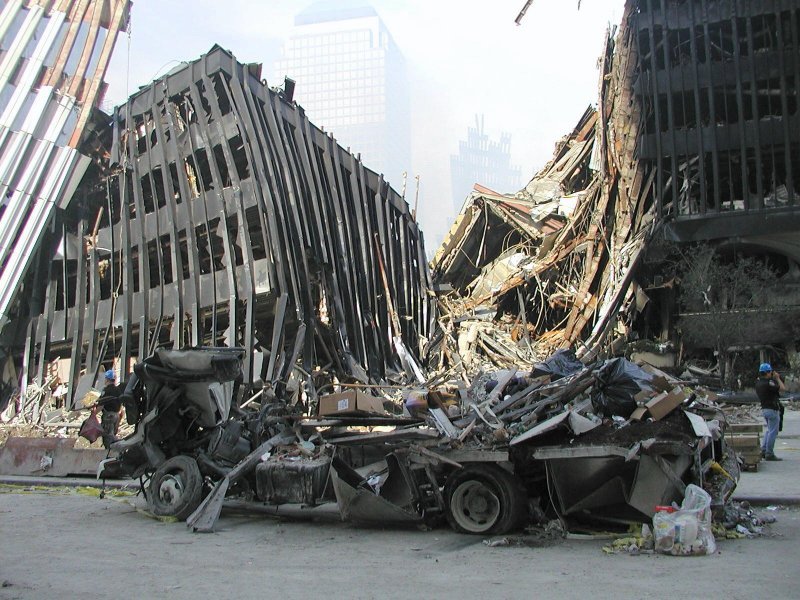 BELOW: What appears to be a DEW attack 'test-run' sharing hallmark damage of Directed Energy Weaponry: No glass, no aluminum, no glass trim, no door handles, no soot, wilted metal sometimes with gaping holes and/or insta-rust, melted tires/wheels, defies normal explanation.

ABOVE: 10:36 into video -- microwave-oven's microwave beam directed at lightbulb; notice internal metal parts superheat and melt; notice also the 'purple haze' which is also seen in video footage of suspected wildphyres assisted by microwave directed energy weapons (Gatlinburg, TN, many sites in Cali, etc.). Superheated electrical wires, steel wood construction nails and drywall screws, steel I-beams inside wooden houses near flammable materials... Is this how the Paradise and other Cali wildphyres were started (recently in 178 places all at once in one night) and made so much worse? Also, many of the wildphyres before then, too?

Is it possible that Their purpose is to drive people off their land, making way for UN's AGENDA 21 land-grab to disempower and remove from people their best means of self-sufficiency and self-direction (i.e., land ownership)? Is it also possibly to create benefit for Them by causing disaster capitalism? For example, now that electrical power in California will be officially turned off for a week at a time 'to prevent wild fires' (that have been artificially created and hyped for decades by Directed Energy Weaponry), They are going to sell lots of generators, solar panels, batteries, residential grid/self electrical switching systems, and low-power-consumptive machines...meanwhile slowly suppressing California, the 8th largest economy on earth. Once They force everyone onto solar power, well They can already control the weather and therefore the sunlight and therefore the power available. Silent, secret supression. At all levels: PROBLEM CREATION, REACTION FOMENTATION, READY-MADE SOLUTION. Hegelian dielectic.

"Why? Why would 'They' or anyone do this?" Maybe your controlled demise is more profitable to Them than your long-term prosperity -- pursuant to page 12 of UN/UNESCO plan, calling educated people "less sustainable" than poor (i.e., land-less). Driving you off the land suits Their Agenda 21" land-grab -- alternately, "Agenda 2030", "carbon tax", "climate change", etc. -- all parts of what is ultimately a mass eugenicidal depopulative effort -- apparently to profitably slay most (see "disaster capitalism") and then stupefy and enslave the remaining 500 million or so; after all They carved it in stone. Bioweapons, nano-toxins, harmful vaccines, predatory institutions, GMO, debt yoke, electromagnetic degradation (wifi, cordless, cell phones), all play a part. Meanwhile, the USAF plans and boasts of "owning the weather by 2025", and youtuber DUTCHSINSE has shown proof that NEXRAD microwave RADAR installed at all major airports is capable of weather modification, and, under control of DoD, USGS and NOAA, many airports have been caught hundreds of times causally blasting high-powered microwave energy hours before the onset of nearby harsh weather. Weather warfare. Untraceable. Depopulation. Agenda 21 land-grab. Disaster capitalism. It is Their Perfect Storm, consuming You and all yours as fodder. They can't escape the planet; They're not going to let you and yours take, consume and "own" what They haughtily consider to be rightfully Theirs. That's the most powerful and likely reason "Why".

DEW is nearly invisible, practically instantaneous (though sometimes the result is delayed), highly effective, and you really can't do much about it; in fact, most people do not even know it exists, could hardly care (until their house gets burned down), and (until that happens) will not even look to see or entertain and evidence let alone thoughts or worries or considerations. Pin-point targeted instant immolation. Reagan's "star wars" but pointed down, right at you, just as Bruce Gagnon warned years ago in ARSENAL OF HYPOCRISY.

Paradise California "wildphyres" incinerated to white ash thousands of structures, totally immolated thousands of vehicles, and felled maybe a few hundred trees. Rapidly spread devastation caused randomly by 'hot embers' -- is an almost total lie, propagated by those entrenched in 'the system' serving vested interests. Practically everything burned appears to have been lit-up primarily from the inside, with most things around mostly untouched. Houses, vehicles, even the trees ignited inside-out, just like what happens in a microwave oven. In one night, 170 fires began. It's not just improbable, it's unprecedented, impossible by natural cause.

Deb Tavares 'predicted the future' by revealing with Rense on youtube in 2015 the The Plan to Burn Up Northern California more bad news".

What it looks like when sheeple sleepers finally, finally get violently woken up by being personally harmed, directly impacted. Nearly nobody truly cares until they themselves are targeted and harmed, until they finally feel true pain. She is one. And from her we've heard one little blip, seen this one little thing...and then, poof, she's gone again into obscure silent suffering. It will take so much more than this. 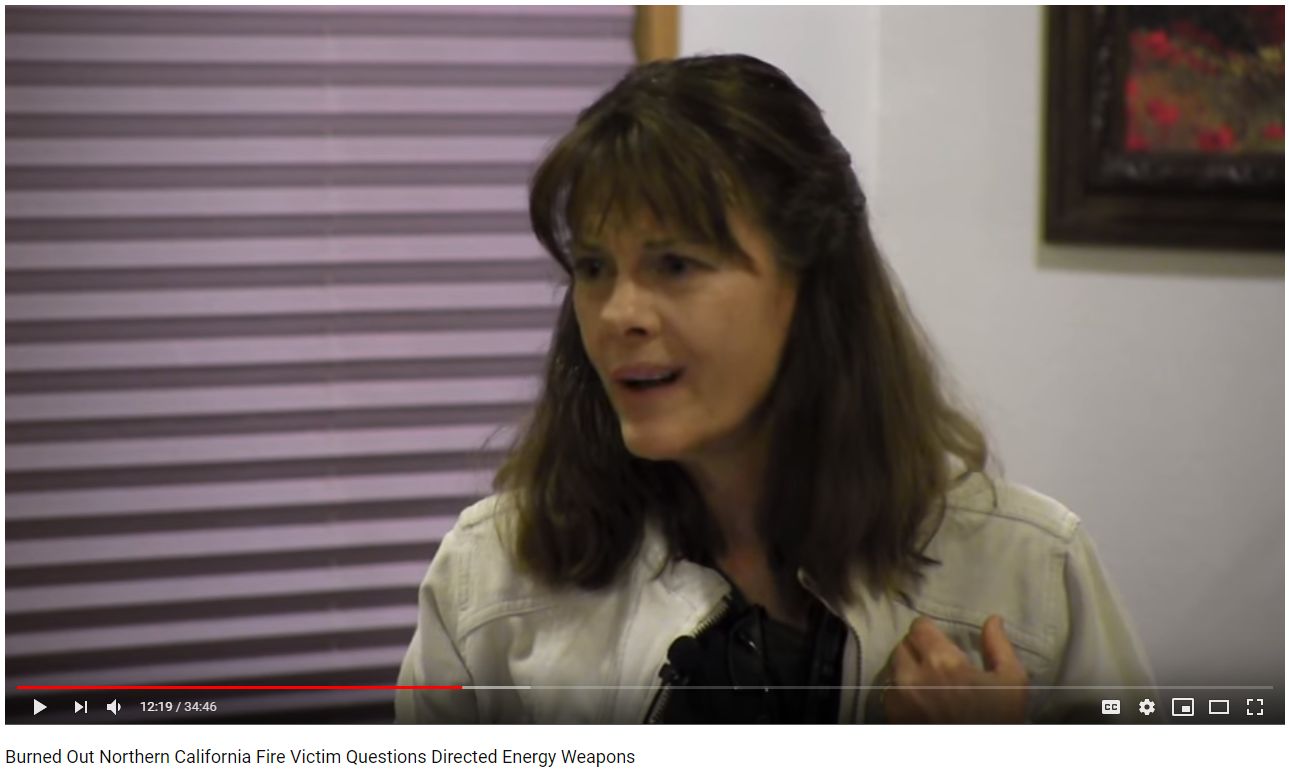 Anyone who ever shrieked that (and there were and still are so so many) was/is a dangerous liar or piteously stupid...and intending to dupe you.

All evidence shows They've had DEW for many decades.

Seven towers (well over 200 million tons) were 'turned into dust' whilst in mid-air.

In seconds, hectares of concrete and miles of steel vanished into clouds and vapor.

The "rubble pile" didn't even fill up the three-story lobby area. The amount of material that became dust is staggering.

Meanwhile, millions of papers flew everywhere, but the many hundreds if not thousands of metal filing cabinets were absent from the rubble. It's as if all metal was specifically targeted for vaporization, or "dustification" as Dr. Judy Wood has named it.

It is claimed that the two towers had contained over 3,000 toilets and latrines, also strangely absent from the rubble. Over 43,000 large windows, an expected "small mountain" of glass, also absent. It seems that all hard, brittle material (e.g., ceramic, marble, glass, concrete) was dustified. Tens of thousands of miles of copper wiring, snaking all throughout every part of all 7 trade tower buildings, has totally vanished into thin air. Even the copper windings on the most massive elevator motors was dematerialized by the (most probable) microwave onslaught.

Yet, all nearby university seismographs recorded rumble less than that of a dumptruck.

Nearly everything turned into dust. But that's not even the strangest fact. 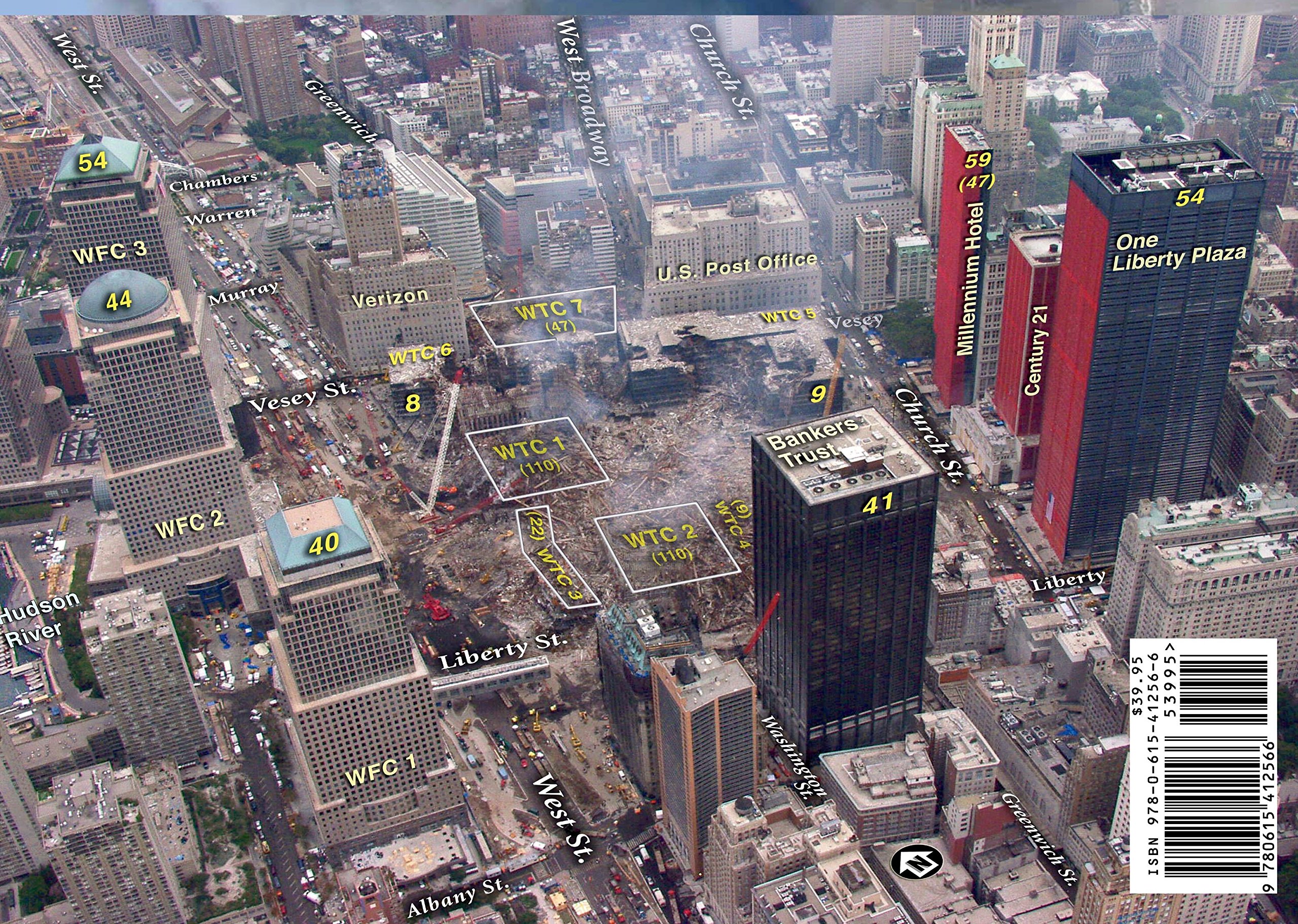 Many hundreds of cars, all parked far away, yet all strangely "burned".   How? 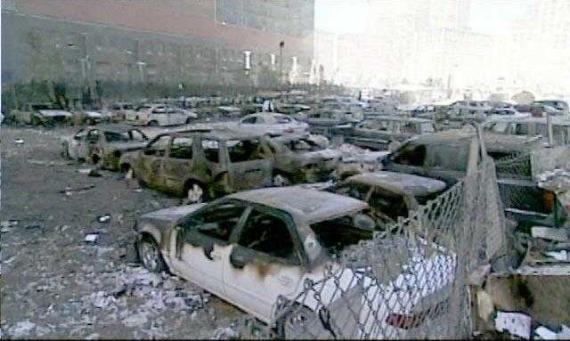 POOF!   No door handles. No windows or trim.   No broken glass. None. Anywhere.

Notice the un-burnt trees and paper!   Also, no soot or scorch marks from flame. 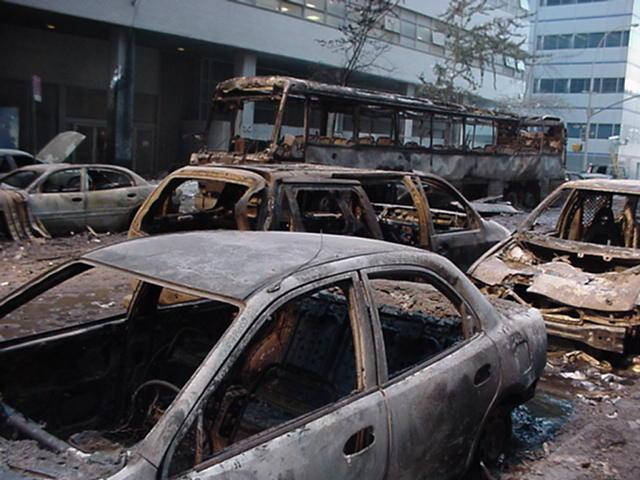 It is grotesquely absurd -- "impossible", even -- at casual glance.

Where did the entire engine go ??   Two planes, jet fuel, gravity and a dust cloud did that? 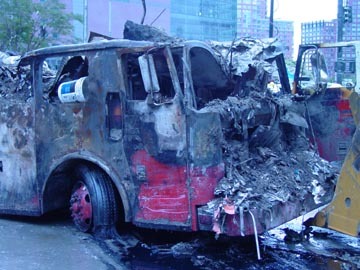 ...and (below) this entire engine, also gone.   Also, notice its strangely "wilted" steel.

Below is the now infamous LADDER 3 fire engine, having been made a primary exhibit in the "9/11 Museum" at Ground Zero WTC NYC -- except that what is shown and what is told are deceptive falsehoods. 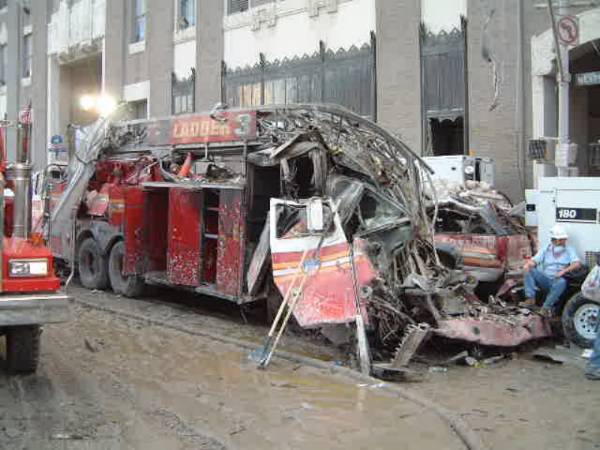 BELOW: LADDER 3 appears in-situ on 9/11/2001 at 32:00 into this video, proving its amazingly unusual "wilted steel" and "disintegrated engine" was NOT caused by fire or any massive debris, let alone "a 110-story building falling on top of it", repudiating the fairy-tale emitted by 9/11 Museum curator, Jan Seidler Ramirez.

Watch a bit further (32:14) to see a vehicle which suffered severely melted steel, seemingly impossible to explain. It wasn't fire, heat or heavy debris that wilted LADDER 3, disintegrated its engine, and also completely "burned" away the steel structure of a neighboring vehicle (32:14). However, vehicles exposed to microwave weaponry (in Iraq and other war zones in which "exotic weaponry" was used, see Panama Invasion) exhibit identical damage.

The LADDER 3 exhibited in the 9/11 Museum has been substantially cleaned-up, its "impossible" evidence (i.e., disintegrated steel engine block) conveniently removed, presumably to preclude at least some of the unanswerable questions. Compare:

Heavy structural steel. "Spaghettied". No stress cracks. No fractures. Flash-rusted.
What can do all this? 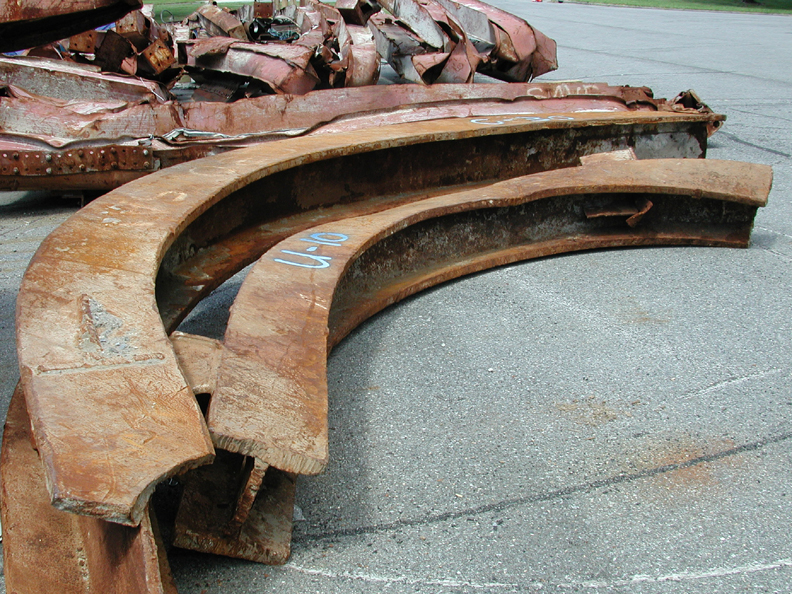 ...all decoys and misleads for lazy, lackadaisical or idiotic minds. 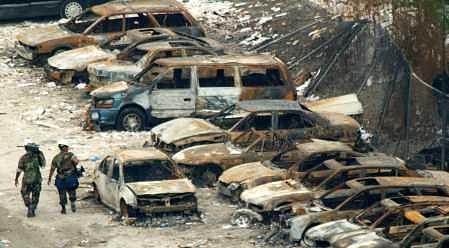 Meanwhile... Identical evidence at the Pentagon. 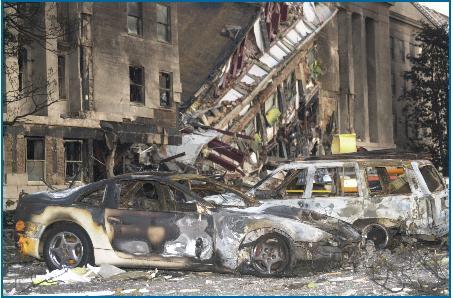 They're not even hiding it, (presumably) certain that most people are sufficiently programmed by mass media which is totally controlled by the boastful military's "full spectrum information dominance" -- below picture from wikipedia.

Below: Tinker AFB personnel, on the front lines of rubble inspection at Murrah Building (presumably as gatekeepers). Probably not coincidentally, Tinker AFB is major facility behind airborne directed energy weapons.

Wilted metal.   Vaporized engine blocks.   This time, by the hundreds if not thousands. 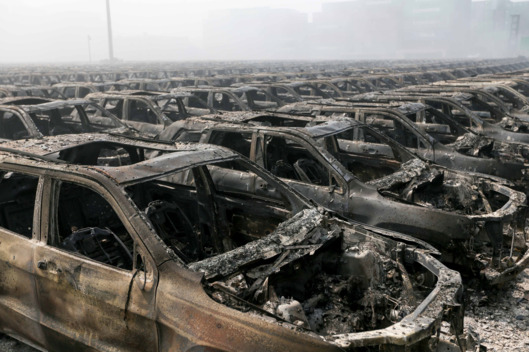 The repeating pattern evidences a new kind of weapon. 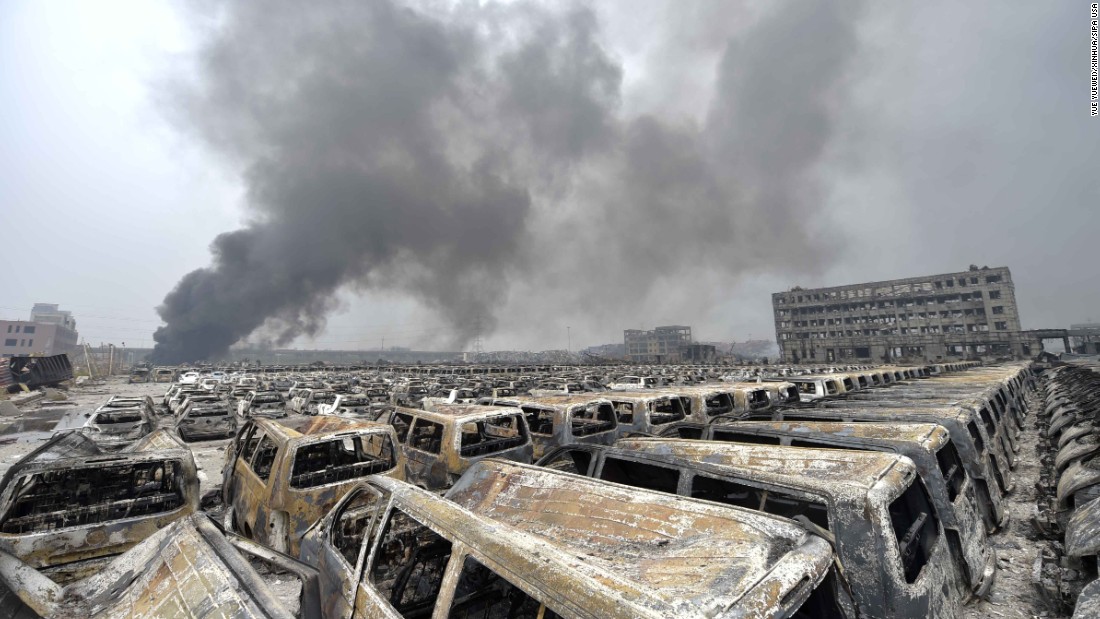 BELOW: Star Wars in Iraq 2003 Silent Laser Microwave Energy Weapons -- Numerous reports include: Shrunken corpses. Partial catastrophic burns - boiled and exploded eyeballs (that first 'go grey' and are blinded by 'insta-cataracts' (as evidenced by Melissa Doi's recorded half-hour long phone call to emergency-911 from within WTC, complaining, "it's very very very very hot", and lamenting, "I can't see the air anymore", and "there's so much smoke" yet tellingly not cough once during the entire call - what she (and five others sitting with her) mistook for "smoke" was most likely their blinded corneas, greyed-out by microwave directed energy weapons); burned brains; exploded skulls; remainder of bodies untouched. Silent; no sound; no physical projectiles. Molten and fused metal. Puddled aluminum (just like ay OKC, 911 WTC, and NorCal "wildfires"). Wilted and insta-rusted steel. Notice also the fine mist, also identical to 9/11 and other DEW-attack sites. 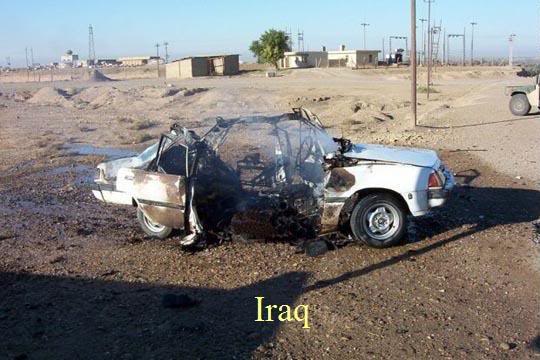 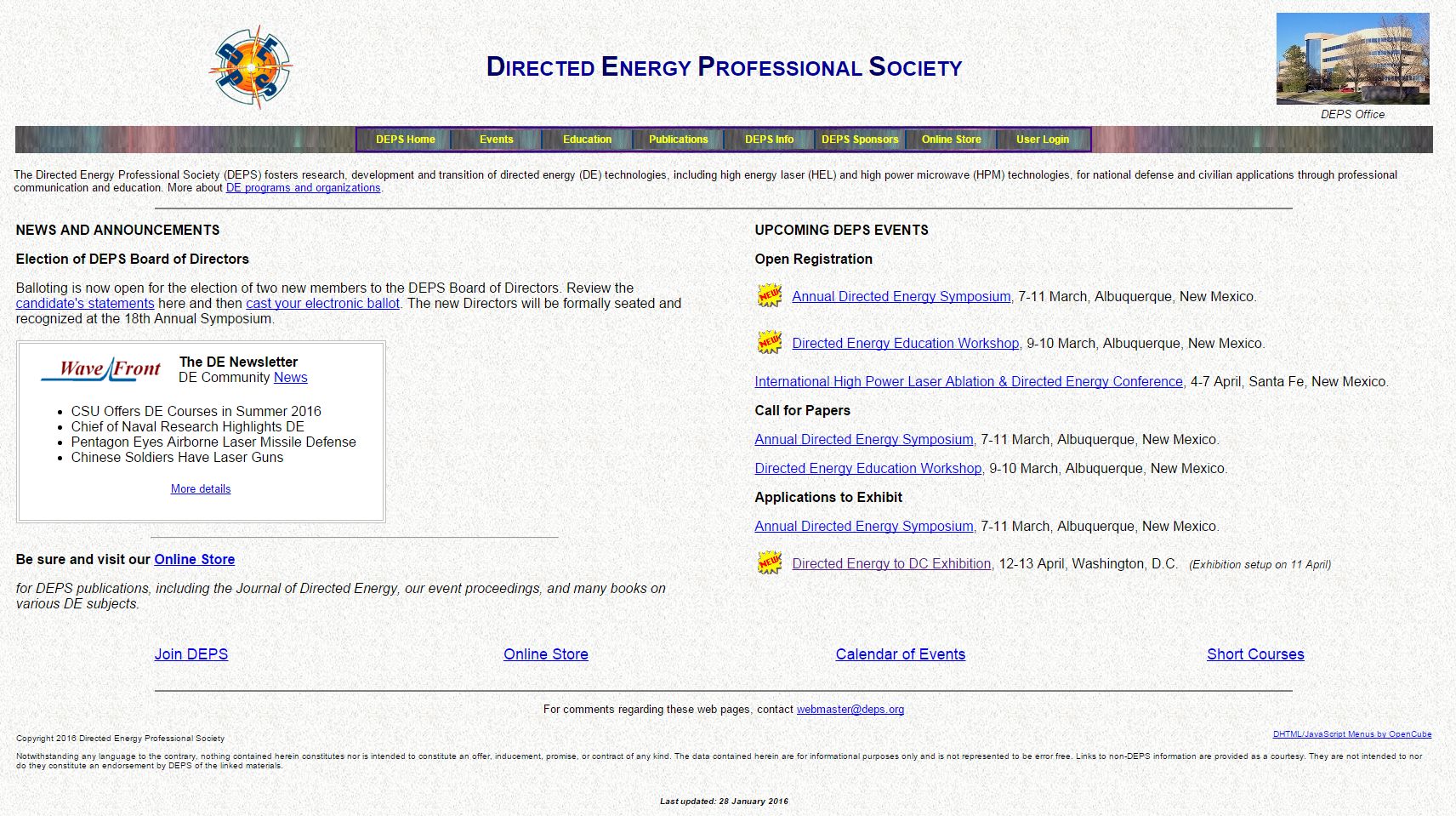 All "official stories" and explanations do not explain all evidence; instead, all evidence indicates otherworldly, invisible, untraceable directed energy weaponry. 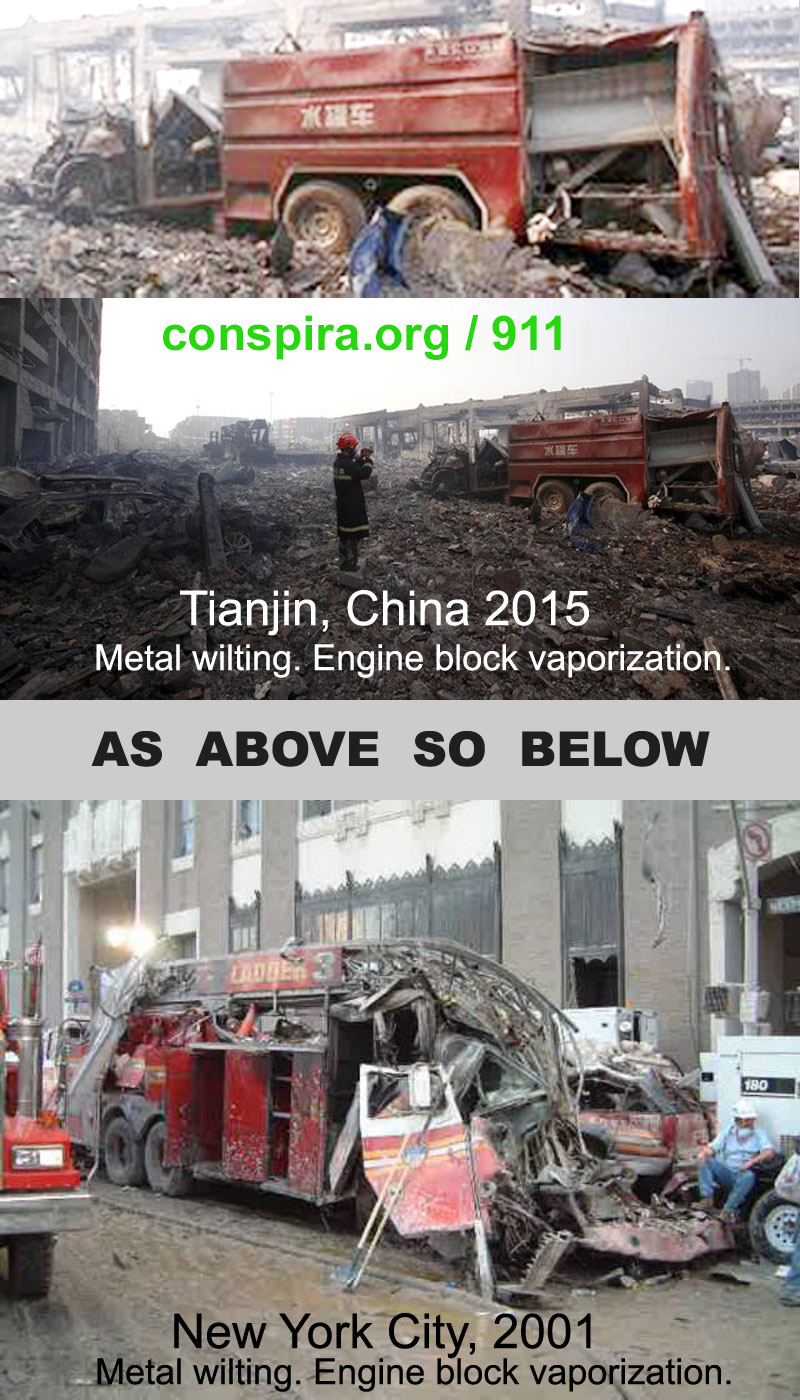 "The weapon can slay any being within the three worlds..."
The Mahabharata, Sanskrit epic of ancient India

No matter how painful, "crazy", or occulted, truth must explain all evidence. That is why the evidence collected by Dr Judy Wood is ignored and vilified instead of touted and explored, because it renders all common theories and explanations wholly insufficient, and perhaps even deliberate lies.

"It's easier to fool people than to convince them that they have been fooled." Mark Twain

Lies are extremely difficult to tell in reverse, so: Play their news footage backwards: No plane present in wide-angle view proves video fakery in under 10 seconds. And if they faked one plane...

Also excellent, and only 4 minutes short. What it is to be Awake.

"... directed energy weapons were a causal factor in the destruction on 11 September 2001 (9/11) of the World Trade Center complex (WTC) in New York, NY." - John Hutchison, Affidavit

"To sum up; the Bush Administration destroyed [or allowed to be destroyed] all files and evidence that were located in WTC buildings 1, 2 AND 7, as well as the pentagon. The SEC were investigating numerous fraud cases including Enron, Halliburton, The Carlyle Group, the $2.3 Trillion missing were being audited in the exact location where the "plane" hit the Pentagon. all evidence was destroyed that was being stored in all [seven of] the buildings that "collapsed" [followed by an immediate "clean-up" of the largest crime-scene]. ... No evidence, no crime, no investigation, no indictments. 9/11 solved!"

When you look deeper and broader, you find that

Per the latest of the (so far) four "official" stories: 38 seconds after the first WTC Tower fell, Faux News revealed that the crime had promptly been figured out: The culprits were 19 Arabs, a few hiding in caves or bunkers, others wielding box cutters, yet none of them listed on any plane passenger manifests, which were all seated to only 20% to 58% capacity. Dangerously angry and lazy Americans consumed all the lies.

~31:00 Angkor Wat was hit by Directed Energy Weapon. The "weathering" looks identical to Dresden, Germany (post WW2) whose man-made "firestorm" was also seemingly a DEW attack: Strong evidence includes (A) the majority of dead bodies in the streets had hair, full clothing; (B) 1,600-degree instant-heating inside deep underground bomb shelters, with hair intact, clothing still on, and apparent instantaneous microwave onslaught evidenced by corpses not cowering or shielding but still sitting as if zapped by quick-kill DEW attack.